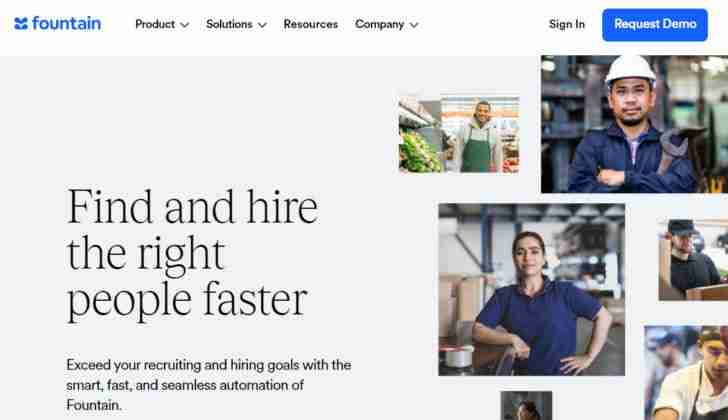 Over the years, dozens of startups have successfully used innovations to help make the hiring process easier. While many have focused on securing candidates for salaried employees, high volume hiring for hourly wage workers has been the focal point for some, including the San Francisco-based Fountain.

Founded in 2014, Fountain offers a talent platform to make hiring easier for companies looking to fill hundreds or thousands of roles. High volume hiring, which comes with high staff turnover, has specific requirements that traditional talent platforms may not fulfill.

Fountain specifically caters to high-volume hiring and has helped companies in over 75 countries hire more than 9 million people since it launched. Deliveroo, StitchFix, and Sweetgreen are some of its clients.

Despite its success as Fountain, the company began life as OnboardIQ, operating on OnboardIQ.com. Initially, OnboardIQ provided a way for companies to “onboard” their new hourly hires, integrating the new employees into the workforce. The name suited the company for a couple of years before it outgrew it as it expanded its purpose.

In a blog post, Fountain co-founder Jeremy Cai described why OnboardIQ wasn’t fit for purpose as a brand name any more:

“Over the years, however, we began to realize the shortcomings of our original name. OnboardIQ was no longer meant for just onboarding, as our customers began to use our platform across the hiring stack, from sourcing candidates, to screening, to continuous workforce management.”

Cai, now the CEO at Italic.com, chose to rebrand his company to Fountain, acquiring the Fountain.com domain name in the process. The rebrand was announced months after the company raised $9.1 million in Series A funding, which likely contributed to Fountain’s ability to secure Fountain.com.

Fountain.com, which sold for $95,000 at a 2007 domain industry conference, was acquired by Fountain from home services company Porch.

Porch itself received the Fountain.com domain after it acquired Fountain Software, a service that connected users with experts such as doctors, lawyers, and tech support through video chat. Porch’s acquisition of Fountain closed in 2015, 2 years before OnboardIQ secured Foutain.com for its rebrand.

Fountain came to my attention thanks to its recent $100 million Series C funding round at an undisclosed valuation that takes the company “very, very close to unicorn status,” according to current Fountain CEO Sean Behr.

Post link: Fountain.com, which outgrew its original domain, adds another $100 million in funding